Upon graduation from law school, Judge Mayle practiced law with Dewey Ballantine LLP in New York City for several years.  She then moved to Toledo and joined the law firm of Cooper & Walinski LPA where she practiced business litigation in state and federal courts across the country.  In 2011, she joined Thacker Robinson Zinz LPA where she continued her business-litigation practice until her election to the Court of Appeals. 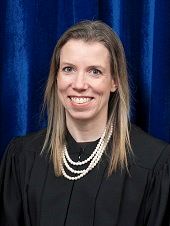 Judge Mayle has volunteered for several community and professional organizations. Currently, she serves on the Executive Committee of the Ohio Court of Appeals Judges Association.  She is also a sustaining member of the Junior League of Toledo. She previously served as Editor-in-Chief of the American Bar Association Section of Litigation’s Woman Advocate Committee’s award-winning newsletter, The Woman Advocate. She is a member of the American Inns of Court, Morrison R. Waite Chapter.

Judge Mayle and her husband Andrew have three children.